Of all the discussions on current world trends, I must say, this one can truly make you see the naked truth of the situation. The governments and multinational corporations of the world are not planning for a larger population in the future, they are planning for a smaller one. This is something often talked about freely at meetings like Davos.  A reduction of somewhere between 70% to 90%  by 2100 is expected if current “climate change” accords are followed. This is a look at the planned use of energy availability by the global elite as a tool of genocide to get rid of billions. Already being implemented by various carbon reducing accords lets take a look at the trends already being put in place by the worlds multinational corporations and governments.

Energy production under every international mandate on climate change is set slash carbon dioxide emissions dramatically, especially in the developed west, into the future. The developed countries are to go first with carbon reducing schemes of one kind or another. President Obama  signed an agreement in China to reduce carbon emissions by 28% by 2025 coming from the U.S. while China committed to possibly getting some carbon trading scheme going by 2030. China builds a new coal power plant every ten days and must have laughed when Obama left for he is doing to America what no foreign army could do, destroy our ability to produce energy. Godzilla could not destroy the U.S. as efficiently.  Anyone who reads the local news story about a power plant being shut or looks at their power bill always going up should know that they are feeling the effects. Agenda 2030 with its Sustainable Development Goals to C.O.P. 21, you and your family are going to have to live with less energy now and in the future. Don’t make the mistake that you will be paying less or are going to live a “simpler lifestyle” either, you will pay more. It’s called austerity in a post consumer society and the C.O.P. 21 Climate Summit that wrapped up in Paris, France has signed you on. It seems the entire world has signed on to a plan to eliminate man made carbon dioxide to levels that can be absorbed by ” plants, oceans and soil” sometime between 2050-2100. Agreed upon terms at the summit also mandate emitting no manmade carbon dioxide by 2100. This would require a complete overhaul of every society on Earth to achieve these goals and there is the pesky little fact that humans exhale the trace gas. If you agree with “climate change” or not, there are some harsh truths that must be examined. If carbon free methods of producing energy were put into wide scale use the supposed dilemma would be solved. They are not and often are actively suppressed, this article will show you why. Your very quality of living and even life itself depends on the availability of energy in the form of heating your home, transportation, agricultural production, among  every other process needed to sustain life including the carbohydrates your burning right now to read this article. If you think this is just a game played out by academics in lab coats and billionaires at Davos, think again. Montreal  just started banning woodstoves for heat. Imagine one of the coldest places to live and you can’t use a woodstove, this is only beginning. Your building codes are international now and all the “walkable cities” with their roundabouts and no traffic lights is seen as progress. Its not progress because you will be walking a lot more as personal vehicles and electric that runs traffic signals is way to expensive for the average person.  Take a look some projections of the future and see what lowering your carbon footprint means when the rubber meets the road. Ask yourself what the glaring difference between these two graphs are and you will see that a lot of people aren’t gonna make it. 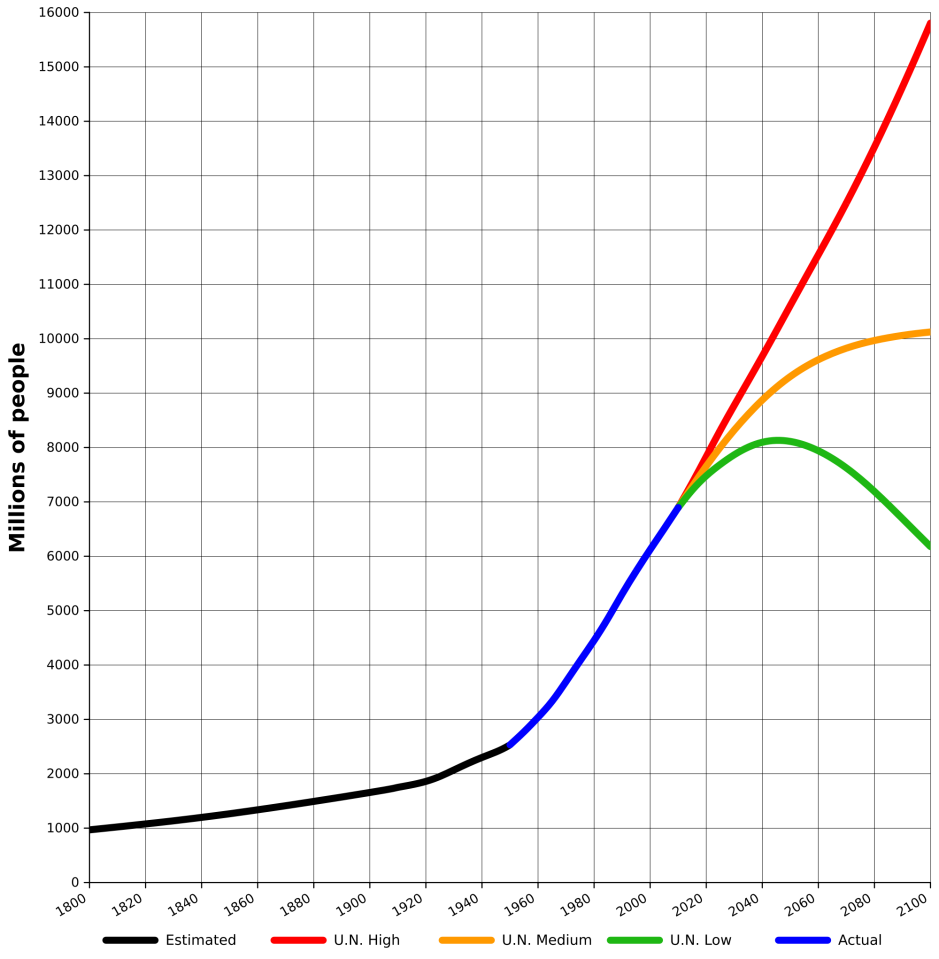 U.N. numbers show 3 Scenarios all starting to diverge around 2010.  Only the green one drops like the steep drop in energy production indicated by the trend in the top graph. Do they know something we don’t?

Three possible outcomes for population growth according to U.N. numbers and all trends indicate a steep drop in affordable energy for a large segment of the population in any of theses cases. Many will not survive. If the population continues on its current trend there will be very little energy to be had for most of the world one would have to be very wealthy to maintain what is considered a normal lifestyle today. Medium projections peaking out about ten billion and average people not faring to much better as far as keeping warm and having proper food and water. Then we have the third population projection that inexplicably drops like a rock just like the forecast for per capita energy consumption. Known as the “U.N. low” estimate it will be the result of the climate treaties your governments are signing now.  You can read a report from the World Economic Forum detailing three very similar scenarios and their security implications by reading this.

As you can also see that energy production pretty much kept pace with population until these climate change accords were rammed through as if the decision to turn off the spigot has already been made.

Well my friends the decision has already been made and all current trends indicate that. Not to get rid of global warming but to get rid of you. Knowing full well that population will come down when there are not enough resources to have a decent life for hardly anyone, the planners of this world have already pulled the plug. It would take a massive effort and years to turn the energy situation around if world leaders wanted to sustain a growing population but they don’t. Check out World Energy and Population, many of the graphs in this article are reproduced under fair use for educational purposes from the site.

The world is looking at about 80% or more population reduction by many estimates if current carbon accords are followed to their conclusion.

This is the Globalist preferred “U.N. Low” estimate

What the real truths are and the questions they lead to are at the heart of the matter and of grave concern for the mass of humanity. Controlling your access to energy is not energy control, it is people control! Even if you think that there are too many people in the world, remember you and your progeny are being targeted as well.

4 Comments on The Globalist Death Equation: Energy vs Population