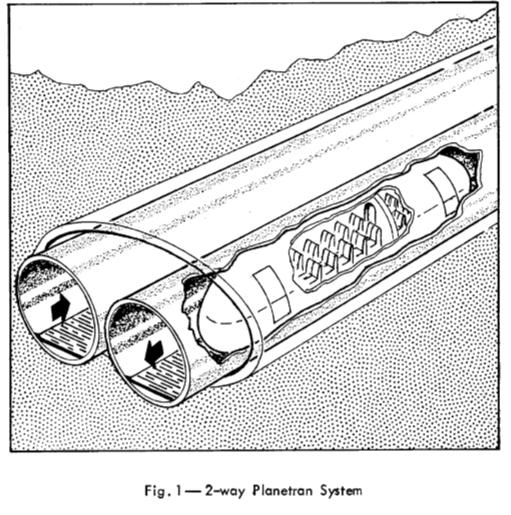 Some technologies are not meant for public view or accreditation until the time is right. When these amazing scientific advances are brought forth it is done slowly and presented as cool and convenient. As with computers, cell phones and the internet among many other modern technologies. Always set in boring terms so the general public doesn’t notice. One rule applies. The military gets it first. Then some civilian corporation with close ties and funding from the U.S. government just happens to “pick up” the research. Military research and development that is many years old has a second market in the public sector. This may be the case with Deep Underground Base and Tunneling technology that has been rumored to exist for decades. These documented subjects are dismissed as theory until they are no longer theory. Now the idea of underground supersonic tunnel transit connecting cities is publicized in the form of Elon Musk’s HyperLoop concept. Being originally tested above ground. Is SpaceX is thinking about taking the idea subterranean? 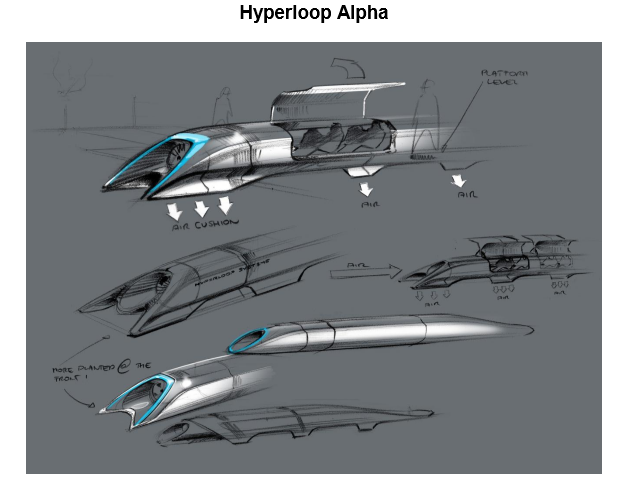 Elon Musk may actually be serious about tunneling under L.A.

“Traffic is driving me nuts. Am going to build a tunnel boring machine and just start digging,” he tweeted at the time, adding, “it shall be called ‘The Boring Company.'”

Just going to slap together a tunneling machine and a supersonic train in a month? Such a boring endeavor being undertaken. It is true he is the only one in the world that can say something like that and actually mean it.   Having somehow gotten the keys to the kingdom to many technologies that used to be the sole domain of national governments it would be hard to discount the statement. What is this technology based on and what will it look like in its final version?

Exciting progress on the tunnel front. Plan to start digging in a month or so. Elon Musk ‏@elonmusk Jan 25

One Tweet reported by USA Today states he intends to bore a tunnel under the L.A. to save time on traffic.

Could there be a pilot project planned for the HyperLoop system? A prototype is currently being tested  at Space X Headquarters. Musk himself leaving much room for speculation with nebulous Tweets about underground tunnels. Possibly even pitching it as an infrastructure project to the new U.S. Administration.

It has been speculated that this very same system has been functional for years. The HyperLoop and V.H.S.T. (Very High Speed Transit System) first proposed in 1972 are basically the same idea. Almost identical in concept. An aerodynamic train like pod configuration in a specially pressurized or vacuum sealed tunnel gliding on magnetic levitation or a bed of high speed air. Overcoming air friction. Able to carry both passengers and cargo at supersonic speeds. Crossing the entire U.S. in an hour. Almost every science fiction fan has come across ideas of a supersonic transit system underground connecting major Deep Underground Bases.

Salter’s Original design. Was it built?

Here it is. It couldn’t possibly have existed before but now the same exact design is being tested in the form of the HyperLoop. Teams from around the world are competing for the best civilian version prototype in a SpaceX  sponsored competition. 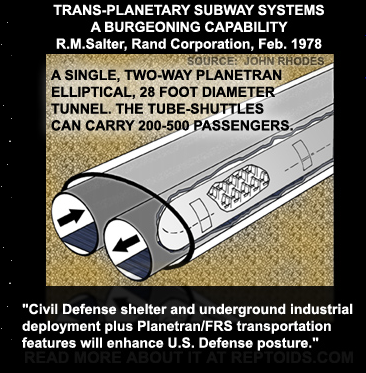 Many designs have been put forth and all based on the work of Robert M. Salter a lead scientist with the Rand Corporation that wrote the Very High Speed Transit System about the V.H.S.T. in 1972. Another followed in 1978 titled “Trans Planetary Subway Systems: A Burgeoning Capability . These documents form the basis for theories that this technology already exists and has been in use for quite sometime by the government. Salter was interviewed in a June 11 1972 article by L.A. Times science writer George Getz as reported by Intellihub. This along with the documents and patents filed around the same time fueled a lot of questions.

A Rand corporation physicist has devised a rapid transit system to get you from Los Angeles to NY in half an hour for a $50 fair. He said existing technology made such a system feasible and so does a cost analysis. The essence of the idea is to dig a tunnel more or less along the present routes of U.S. highways 66 and thirty. The tunnel would contain several large tubes for East West travel of trains that float on magnetic fields, moving at top speeds of 10,000 mph. Passengers would faced forwarded during acceleration, backward during deceleration. According to R. M. Salter Jr. head of the physical sciences department at Rand, the idea of high-speed train travel using electromagnetic suspension was first put forward in 1905 and actually patented in 1912. The trains he suggested now would be single cars rather than actual trains, and would be big enough to carry both passengers and freight, including large containers and automobiles.         LA Times June 11 1972

This article has led many to speculate that Deep Underground Bases and the Tunnel systems that connect them have been in use for many years. Precious little hard proof has come up that this system actually exists in the capacity described here. Although some of this evidence is very compelling. The SpaceX concept is very similar to Salter’s design.

The tubes would be emptied of air, almost to the point of vacuum, so the trains would not need much power to overcome air resistance. They would not even have to be streamlined. In addition to an electromagnetic roadbeds, the opposing electromagnetic loops of wires in the floors of the gondolas would be super cooled with liquid Helium to further eliminate electrical resistance.      LA Times June 11 1972

No doubt underground bases such as N.O.R.A.D.,  Weather Mountain and many others have been popularized and tunneling projects are going on all around the world. Some more intriguing than others. Still tantalizing connections come too light from time to time reinforcing the narrative that the public is not being told the whole story.

What may be more telling could be the method of tunneling that may be used if a larger version of  SpaceX’s HyperLoop were too be built. Many researchers have pointed to advanced tunneling methods and boring equipment possibly used by the Defense Department. Boring machines first patented by the Atomic Energy Commission and US Energy.  These could be used to construct Deep Underground Bases. As depicted in the patents the boring machines melt the surrounding rock leaving a perfectly smooth surface behind. If such boring machines were built, they could make circular patterns at different levels connected by vertical corridors. Forming a multilevel turn key sealed Underground or even Underwater base.

Perfect for a vacuum or semi pressurized tunnel the HyperLoop system needs. Time will tell if these patents get pulled into use for a scaled up project.

Method and apparatus for tunneling by melting US 3693731 A 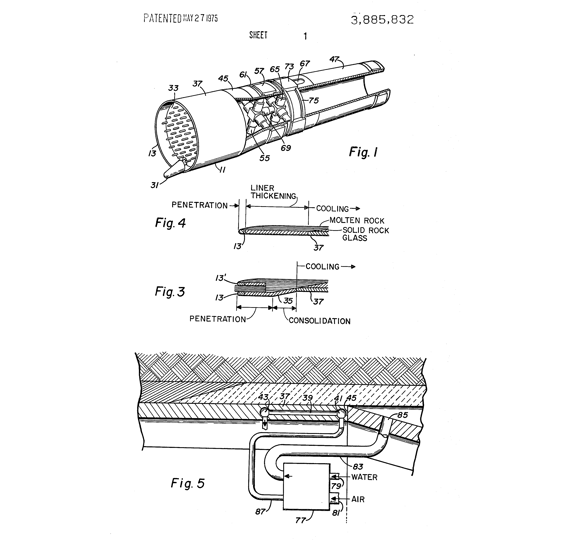 Boring in a circular patterns going down in levels with vertical shafts connecting. The machine can go in a corkscrew fashion down in levels creating multilevel complexs underground

Salter said many tunnels are dug nowadays almost as they would have been in the dark ages. Drilling holes in tunnel faces, and using machines with rotary bits are methods of tunneling that can be improved, according to him. He said the tunnel could be worked on from a great many “faces,” for instance. Salter suggested, too, that electronic beams or even water be used to drill holes for blasting. The high-powered electrons would drill blasting holes almost instantaneously.     LA Times June 11 1972

Indeed the HyperLoop concept is almost identical to Salter’s work in form and function with a few minor tweaks. The SpaceX design paper gives credit to Rand and Salter’s work.  Even the justifications for such a project are mirrored almost exactly.

Is there truly a new mode of transport – a fifth mode after planes, trains, cars and boats – that meets those criteria and is practical to implement?  Many ideas for a system with most of those properties have been proposed and should be acknowledged, reaching as far back as Robert Goddard’s to proposals in recent decades by the Rand Corporation and ET3.     HyperLoop  Design Concept p 2

What form this project will take in it’s final version is unclear. If it is built to full scale at all. What is clear is that this line of research and development is based off an idea long ridiculed in the main stream. Is this another advanced technology to be mainlined to the public now that it’s time?