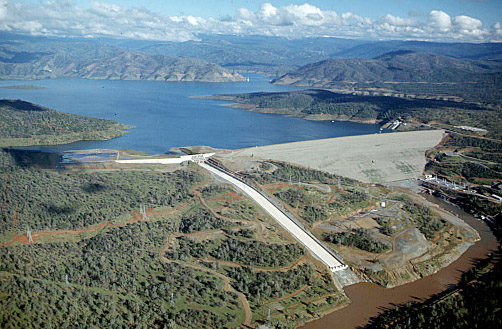 Oroville Dam in California has a major problem with a possible failure due to an unseasonable amount of rain and damage to it’s emergency spillway. Evacuations have been ordered for effected counties. The potential for major damage and loss of life exists if the area receives more heavy rain. This an emergency that geoengineering can help alleviate in the short term. Pros and cons of this technology set aside to get to the deeper question.

Why isn’t this decades old technology being used to save lives or avert disaster?

The answer may be obvious. This would call public attention to ongoing geoengineering programs by the U.S government. Leading to questions about the nature of the entire drought situation in California as a hole and the real capability and risks of geoengineering.

Geoengineering in it’s many forms has been used for decades by governments and corporations around the world. Pieces of evidence and government documents on weather modification are numerous. Available through private websites and the government itself. Why wouldn’t this technology be used to avert a major disaster? Although it is not fully admitted by the United States. The capability exists to easily help the situation in California if more heavy rain is expected. Other nations openly admit some of their programs and ours.

The Indian government issued a report stating that out of control geoengineering by the U.S. was ruining the planet. According to the India Times.

US DEVELOPED WEAPON SYSTEM MAY CAUSE GLOBAL WARMING: GOVERNMENT

China admittedly has a Weather Modification Office and engineered the weather for the 2008 Olympics games. Firing 1000 rockets with desiccating chemicals to make sure it did not rain for the ceremonies. Easily modifying the weather for national holidays  using only 18 jets and 432 small rockets filled with myriad of different chemicals. Making sure it was a clear blue sky when the natural forecast was for rain.

A Guardian Newspaper environment blogger witnessed this admitted geoengineering first hand in 2009 at the National Day Parade in Beijing. May sound familiar to other people witnessing unadmitted geoengineering. With small fleets of jetliners making passes high in sky releasing miles long plumes of chemicals behind them. Forming or dispersing cloud formations.

But was it? By 5.30am, when I arrived at the media centre for the National Day parade, the skies had cleared sufficiently to be able to see a star. But there were still thick clusters of cloud and some mist. It might rain again, I thought.

We were bussed to the press gallery outside the Forbidden City by about 7.20am. A band of cumulus lingered over the Great Hall of the People. They had darkened when I called a friend an hour later.

Just before I rang off, I described the skies to him. “It might still rain on the parade, but I think the odds are now on their [the organisers’] side,” I said.

Once the march started, I concentrated on that, but I recall being impressed by the unusual vividness of the sky on some of the images on the giant screens.

Other colleagues told me they found it remarkable that the clouds seemed almost to be held back from the square, even though there were still some around the edges.

By the time of the fly-past around 11am, the skies were clear until air force jets left behind lines of coloured smoke-trails. Now, six hours later, Beijing is still enjoying perfect conditions.

What happened? According to Chinese Meterology News, there were four attacks on a bank of clouds that approached Tiananmen from the south-west between 7.30am and 9.05am. In total 432 rockets were fired to achieve the desired result.

Xinhua news agency reports that the authorities also had the capacity to delay rainfall.

“Only a handful countries in the world could organise such large-scale magic-like weather modification,” it quoted Cui Lianqing, a senior air force meteorologist as saying

China could do this with precision back in 2008. Even making it snow in Beijing due to mild drought.

The United States still can’t even muster an effort or even discuss the subject. What is going on?  The public is being lied to at every turn about the current state of technology. Possibly because if the U.S. government admitted it could use geoengineering to help in this situation. Then it may come to the public’s attention that it has been going on for years with all the associated risks.

4 Comments on Will Geoengineering be Used to Help Avert an Oroville Dam Disaster?