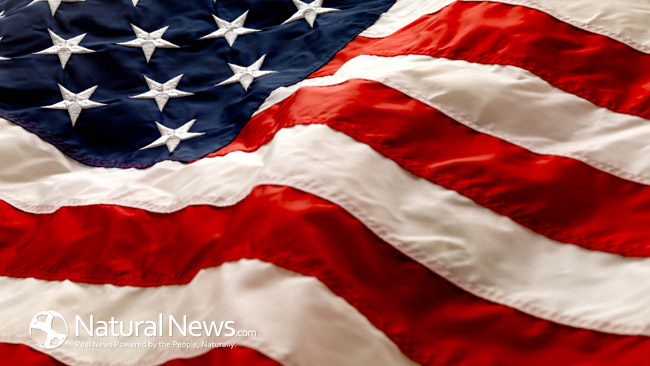 One of the most stunning turn of events in the United States is the complete polarization of the country under the charade of the Democrat/Republican politics. Most U.S.citizens watch in horror as the southern border lays undefended for decades now. Seen and unseen migrant hordes are arriving almost weekly now to invade the United States. By any stretch this is a huge national security crisis and has been for a very long time. It would be well within President Trump’s authority to declare a Title 10 National Emergency on the border.

The military is being deployed regularly from sporting events to anti-drug operations and states of emergency are constantly being declared for everything from riots to snow storms. Whole cities and schools are put on lock-down for the slightest provocation. Yet when it comes to border security and using the military it’s some big deal. The military’s primary purpose is the defense of the Continental United States (CONUS) and it’s sovereignty. Why even have a military if it didn’t fulfill this basic function? Never before has a population been so propagandized by media and the Democrats into believing that having a secure border is a bad thing.

It is the intent of this article to explain what Title 10 Authority allows the President of the United States to do in times of National Emergency with links to the laws that govern such situations. Only to highlight the policies and procedures that are put in effect by the U.S. government when the President directs them. Using two unclassified documents in combination, we will paint a picture that is quite telling and informative about Title 10 authority and the ten F.E.M.A. regions can activate.

Anyone that has been paying attention can see the massive build up of men and material into in to a vast authoritarian police state since 9/11. The erosion of traditional protections like the Posse Comitatus Act , which sets very strict limits on military conducting law enforcement duties with in the continental United States (CONUS), has led to the military being involved in almost every area of federal and state domestic affairs. Except for border enforcement because both political parties didn’t want it. Now President Trump can unleash this executive power that has been transferred to the President by Democrats and Republicans for years to finally end the border crisis.  These are operations are divided into two categories: 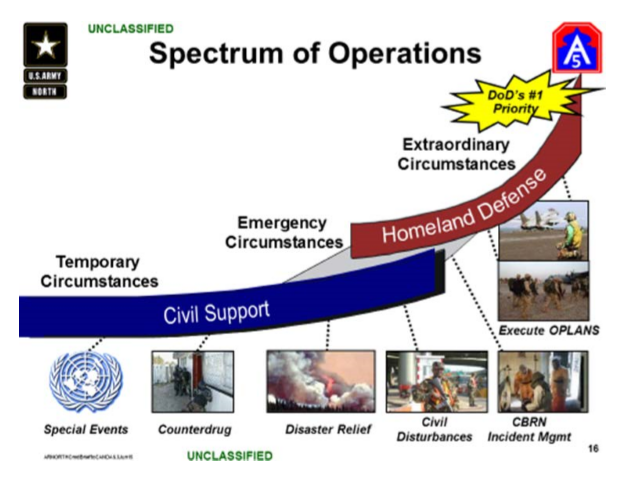 The spectrum of DSCA ranges from supporting the US Secret Service for National Special Security Events (NSSE), Federal Law Enforcement. Agencies in Counterdrug and Border Security operations, FEMA for natural and manmade disasters (to include the extreme complex catastrophes), to the most dangerous a Chemical – Biological – Radiological – Nuclear (CBRN) incident. Recent examples include: providing Navy divers to recover the remains in the IH35 Bridge collapse, establishing housing at three separate DOD Installations for unaccompanied children coming into the US from our Southern border – in support of the Department of Health and Human Services (DHHS), and forming and training two EBOLA medical teams that could be inserted into any US hospital to assist in the care of infected patients – DHHS

Everything under the sun it seems can be solved with the military except border security? Have a special U.N. meeting, need to raid a pot garden, do those pesky George Soros funded riots keep popping up?  Just send in the military to help! But not when our very country’s existence is at stake with crumbling borders and hordes of third world migrants pouring in just like Europe.

Since the passage of the National Defense Authorization Act for Fiscal Year 2012 almost all protections against military in domestic affairs and a standing domestic army have been removed for the citizens of the United States but if this huge security Juggernaut is used to actually defend the country then the Democrats would have to take it to court. You can’t roll through a stop sign or violate any little law without paying out the nose in America today but border enforcement is somehow immoral as 5 million actual U.S. citizens rot in jail mostly for non-violent crimes. Yet feel sorry immigrants who commit a felony by crossing the border illegally? It defies logic.

Title 10 authority can activate any or all Standing Defense Coordinating Officers (DCO) embedded in each of the ten FEMA Regional Headquarters. Army can be called in to assist from any number of federal agencies, states or civil authorities under the command of USNORTHCOM reporting through the SecDef to the President of the United States (POTUS). The people tasked with this assignment are the Defense Coordinating Officer (DCO) and their Defense Coordinating Element (DCE).  These small 9-10 person all Army teams led by a former Brigade command or equivalent Colonels are assigned to ARNORTH but perform their day-to-day duties located with each of the 10 FEMA Regional Headquarters.  Pre-activation they closely work with their Federal partners as well as with the State JFHQs and State Emergency Managers within their region to develope State and regional plans.  When activated they directly represent the SecDef and work with FEMA’s Federal Coordinating Officer (FCO).

Equipped with advanced encrypted communication and mobile command vehicles they would be responsible for coordinating the needed manpower and equipment for the mission. Defense Coordinating Officers work with 173 US Army Reserve Emergency Preparedness Liaison Officers (EPLO) located two per State and a five person team at the FEMA Regional Headquarters.  These soldiers are the Subject Matter Experts (SME) for their state. EPLOs are valuable asset because they provide situational awareness at the State level.

What threats are these units tasked to deal with? Here’s a list from most probable to most severe. It seems every scenario is on there. 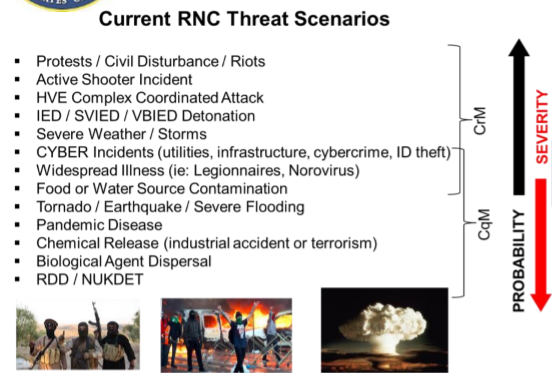 How long can troops be deployed without invoking the Stafford Act , Insurection Act , or in fact any act of congress?

Immediate Response Authority: Response at the municipal, county, or tribal level is provided initially under IRA. If requested, any commander can provide resources to save lives, prevent human suffering, and mitigate great property damage in response to a request from a civil authority, under imminently serious conditions and if time does not permit approval from higher authority. There is an unofficial time limit of 72 hours for immediate response operations. This is very open ended and can be applied to almost any situation. The Secretary of Defense is not even needed to authorize this type engagement.

Small-scale events can be handled by a DCO, his DCE and EPLOs.

Medium-scale events may require deployment of a mission command headquarters such as USARNORTH’s Contingency Command Post, a Joint Headquarters or a Functional Component Command (FCC).  Such a mediumscale organization is likely to be commanded by a Major General.

Under the NDAA:  Large scale troop deployments can last as long as 120 days with no say from congress at all. The National Defense Authorization Act (NDAA) of 2012 added Sec. 12304a. authorizes  the SecDef to involuntarily order the Army Reserve, as well as all Services’ Reserves, to active duty to provide assistance in response to a major disaster or emergency for up to 120 days. This all at the sole discretion of the President of the United States (POTUS). Congress cannot even review it for 120 days.

MOA and MOU Agreements: Mutual Aid Agreements and Memoranda Of Understanding are contracts that can be entered into with any civil authority, where as DoD resources will be provided for an unspecified amount of time for very specific missions. The way the document reads any city, county or state civil authority, or even dog catcher it seems, can request and receive DoD resources except border enforcement. These are the agreements used for facilitating training off military property and can be entered into with private individuals or even other countries and has been used for global application.

The defense department has built fortifications all over the world but somehow cannot be used to protect our own borders. All this military and law enforcement has been used on America’s citizens for years so why not turn it towards actually defending the country?